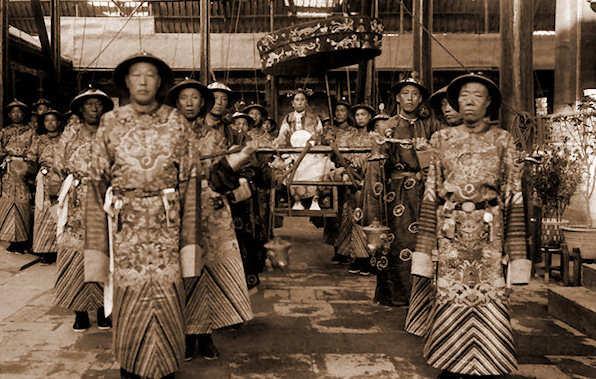 There has been a very long history of eunuchs in China indeed eunuchs became influential at court as long ago as the Qin dynasty over two thousand years. Originally castration was carried out as a punishment as in the famous case of the great historian Sima Qian in 96BCE. Eunuchs could not father children they were trusted servants compared to the relatives of the Emperor and Empress who often conspired to elevate their children to positions of power. Because an Emperor had to marry outside his family the Empress's power lasted only as long as her husband the Emperor. This abrupt end to a family's pre-eminence led to many brutal conflicts. In the Han dynasty the more impartial power of eunuchs balanced the struggles between the family of the Empress and the family of the bride of the young heir apparent.

After the Han dynasty the custom of foot binding of girls from a very early age kept them house bound. The tradition lasted from the Sui to the Qing dynasty and was at times inflicted on half of all girls. It was seen as a badge of wealth of a household because it implied that the family was rich enough to not need women to carry out physical work. In poor areas the feet of women were not bound so they had to share the work of husbands in manual labor. Slightly richer families would have girls' feet bound and live out their lives indoors, bringing up the family. Read more…

The power of eunuchs continued to grow during the Han dynasty, they were appointed to high administrative positions and controlled all Imperial appointments. As they attended the Emperor from his birth and the Emperor rarely left the palace they were the only means to reach the Emperor. It was the tight control of access that gave them an immense source of income; a bribe of gold to the appropriate officials was needed to gain the Emperor's ear. They received only a basic subsistence salary but also took a portion of all the goods passing through their often sticky hands. Even low grade eunuchs would expect a proportion of food carried into the Forbidden City by farmers. They were seen as the Emperor's personal servants and often at odds with the officials and nobles who sought an audience with the Emperor. Not only the Emperor had the use of eunuchs, senior members of the Imperial family would also have a smaller number of such servants. At times the eunuchs formed a secret police force, spying on potential rivals to the throne and also threats to their own power. Although unable to father children, they were allowed to adopt, and this became a powerful form of patronage. Rich eunuchs would buy a house outside the palace in Beijing that they could use as long as they were back in the Forbidden City by sunset. Their external house (sometimes also used as a temple) would be where ordinary people would try and bribe their way to gain access to the Imperial court locked inside the City. The eunuch Wang Zhen who was executed for giving poor advice had a grand mansion that became the Zhihua Temple ➚ on his death in 1449, the Buddhist temple is one of the few that can still be visited.

The attraction of becoming a eunuch was the potential great wealth that could be attained, for example Liu Jin ➚ after only 4 years in office had accumulated 15 million pounds of gold in 1510CE. The admiral and explorer Zheng He is perhaps the most famous and best regarded eunuch (he was also a Muslim).

The eunuchs were organized into a strict hierarchy, there were twelve departments: utensils; store houses; clothing; food; ceremonial equipment; music; calligraphy and ceremonial support. It was this last department that had the most power as it advised the Emperor on what should be done and when based on ancient precedent. An audience could easily be canceled if the department advised that it would be inauspicious on that day. The director of this division was the Chief Eunuch and the Emperor's right hand man.

The institution of Emperor, as head of the Chinese family of people, lasted for thousands of years and to some extent lives on with the Presidency. In China there has been great respect for the Emperor/President who in turn is expected to rule wisely with the best interests of his subjects in mind. To early European visitors to China the structure was considered close to the ideal form of society. Read more…

On the Sui dynasty's re-unification of China, the eunuchs rose to power again, but never to the same level as during the Han dynasty. There was a brief resurgence under the later Tang emperors particularly Emperor Wenzong where the number of eunuchs reached 5,000, but the following Emperors limited their power to act as functionaries rather than power brokers. In the later Tang centralized control was weakening and the real power was with provincial governors. There was another resurgence under the Ming dynasty, where the Forbidden City in Beijing became their enclave, at one time it has been estimated that there were 70,000 eunuchs. To curb their increasing power Ming Emperor Hongwu banned them from politics.

Power of Eunuchs in China

One of the most powerful eunuchs was Wang Zhen ➚ (d.1449) who effectively ruled the Empire during the regency of Ming Emperor Zhengtong ➚ and it was he that led the disastrous northern campaign to subjugate Mongolia. The eunuch Wei Zhongxian ➚ (1568-1627) is considered the most notorious, the most powerful and villainous. He grew to have a power rivaling the emperor and was expected to found his own dynasty by the adoption of his nephew into the imperial family. It was the weak Ming Emperor Tianqi ➚ who gave him such power; choosing to spend his time on carpentry instead of administration. Wei is often blamed for the final collapse of the illustrious Ming dynasty.

In the following Qing dynasty the great Emperor Kangxi reduced the number of eunuchs to 800 and curtailed their power - he no longer used them to reply to petitions destined for the Emperor - he replied himself. Dowager Empress Cixi despaired about the power of eunuchs calling them ‘rats and foxes’; ‘fawning sycophants’ and ‘artful minions’. The eunuchs and the Imperial administration then became so powerful that they blocked all attempts at reform that would jeopardize their influence and income. During the late Qing dynasty their numbers had gone into decline and the Last Emperor Puyi had less than 1,000 eunuchs in attendance. The last eunuch Sun Yaoting ➚ [1902-1996] was castrated a year after the foundation of the Republic so never saw the power and prosperity of the Imperial court.

Entrance through the Gate of Peace at the Lama Temple Beijing (Yonghegong), or Palace of Peace and Harmony Lama Temple or Yonghegong Lamsery, a renowned lama temple of the Yellow Hat Sect of Lamaism. Building work on the YongHeGong Temple started in 1694 during the Qing Dynasty. It originally served as an official residence for court eunuchs. It was then converted into the court of Prince Yong Zheng (Yin Zhen), a son of emperor KangXi. After YongZheng's ascension to the throne in 1722, half of the building was converted into a lamasery, a monastery for monks of Tibetan Buddhism, while the other half remained an imperial palace. November 2006. Image by Dennis Jarvis ➚ from Halifax, Canada available under a Creative Commons license ➚

In China, castration involved cutting off both the penis and the testicles in one operation. Many eunuchs died as a result of the operation; if they survived it could still take six months for the wound to completely heal. The operation was normally carried out in a special room in the Forbidden City. Boys, usually at about the age of ten, seeking to become eunuchs were given opportunities to back out if they showed distress during the preparations. Because of a long held belief that the body should remain complete the castrated parts were preserved and buried with the eunuch so that he may become whole again in the after-life. When fully recovered from the operation the new eunuch would enter an Imperial school dedicated to train young eunuchs to become accomplished Imperial servants. Although castration outside the palace was made illegal, sometimes fathers would perform the operation on their sons in the hope they might then be accepted at court. Many of the boys came from poor families of the northern provinces who fancied the faint chance of attaining great riches.

The years 1912-49 marked the turmoil when China emerged from centuries of Imperial dynastic rule to that of a modern Republic. Sun Yatsen's dream of a democratic republic was never achieved amidst the turmoil of the Japanese Occupation and then the Civil War with the Communists.