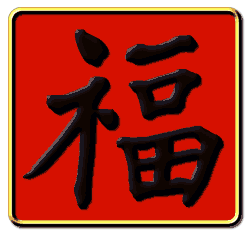 A well organised and useful phrasebook. Very useful for a business traveler or tourist. It has a dictionary of words and phrases with Chinese mandarin and characters as well as a shorter pinyin to English guide. This is followed by dialogue suggestions for common encounters: shopping, traveling and dining.
Amazon details... ➚

One of the most widely seen Chinese characters in China is 福 fú the character for good fortune or luck. You see it painted as a decoration everywhere: on wind chimes, paintings, lanterns, pots and posters. A look at its origin gives a feel of the complexity and longevity of symbols in Chinese culture. It also represents the God of Fortune (Fu) who is part of the good luck trinity of Fu, Lu and Shou (luck, prosperity and long life) .

The character for good fortune consists of the radical for auspicious or heaven sent to the left. The right-hand symbol represents a full container and is an ancient form from oracle bones. It is usually written in black or gold ink on lucky red paper. It is a frequent form for paper-cut art. The character is also part of the name of Fujian province (福健). The Qing Emperors often gave a personally painted ‘Fu’ character to visiting delegations as a gift.

Good fortune descends from above

Fu is widely seen on Chinese New Year posters. In many cases the poster is deliberately hung upside down. This needs a bit of explanation as there are several stories explaining how this came about ➚. Firstly if you look at the character fu there is a certain vague resemblance to the character for upside down dao. The character dao can mean both 倒 dǎo upside down or fall and 到 dào arrive only differing in tone. Combining the meaning of dao and fu gives the idea of good fortune raining down from the heavens. So placing fu upside down is increasing the possibility of good fortune. It may also have something to do with bats (see following) that hang upside down. This is somewhat similar to the European custom of lucky horseshoes ; it is a symbol for good luck one way up but if placed upside down is an ill omen as the luck falls out of the horseshoe.

Some Chinese characters have their origin 10,000 years ago. The very old forms are simplified pictures of objects and animals. Later more abstract notions were represented in a simple way. Now there are a total of 200,000 distinct characters but fortunately only 2,000 for everyday life. Read more…

The Chinese love puns. Another character that is pronounced the same way as fu (in the Beijing dialect) is fú 蝠 for bat. So drawings of bats in a design bestow a wish for good fortune. The character consists of fù 富 wealth with the radical chóng 虫 for insect - as bats eat insects. The good luck motto 蝠子天来 fú zǐ tiān lái literally ‘bats come down from the sky’ means ‘let good fortune come down on you’.

Five bats in a design represent the five lucky gods and the five blessings: long life, wealth, health, virtue and peaceful death. The central bat is placed on top of another widely used good luck symbol, this is shòu 寿 the symbol for the god of longevity Shouxing.

Here is another design including a bat in a less obvious way. Beneath the bat dangles the “endless knot” a Buddhist symbol ➚ for long life; eternal love and friendship. For more on bats see our Chinese symbolism section.

You may see lots of tangerines at Chinese New Year, and this is another play on words. The similar looking character for tangerine is ju 橘 and in the Guangdong area it is pronounced the same as fu 福.

Imagination has led to the creation of many artistic versions of the character for good luck. Some of the designs are based on the ancient seal form of the character. Here are some examples.

The fourth version above has the ‘fu’ element on its own.

The first version above is an example of the character upside down. The fourth is of ‘fu’ on its own.

The first and third versions above have the ‘fu’ element on its own.

For a video of writing the character fu calligraphically please see the following You Tube video.

In addition to the symbol for good fortune, the other character commonly seen to wish for good luck and happiness is xǐ. It is a representation of a ‘drum’ and a ‘mouth’ suggesting a celebration. Two xi characters joined together form the ‘double joy’ symbol seen particularly at marriages. The character crops up in many two character wishes including 有喜 yǒu xǐ ‘have joy’ usually used when a couple are expecting a child. We have a guide to how to make a papercut of the double happiness character.

China has a great range of traditional performing arts: theater, opera, dance, shadow and glove puppetry and story-telling. Many of these have roots back in ancient times - over a thousand years. Mass media has reduced popularity of most forms but devoted practitioners are helping to keep the art-forms alive.
Please wait...
Downloading information about character