Fish (渔 yú) have been a frequently used symbol for good fortune for centuries. This is because 余 yú means 'surplus; abundance' and so a picture of a fish is a wish for prosperity. They are often eaten at Chinese New Year partly as a symbol for a wish for abundance in the coming year. Read more… 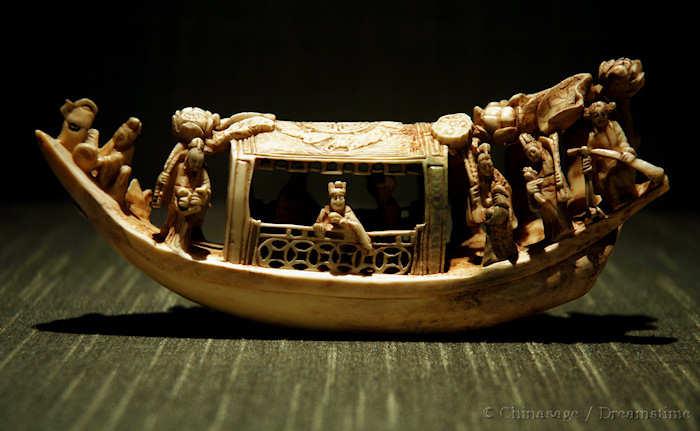 Jade has been the most treasured gemstone in China for thousands of years. Considered indestructible and immortal jade has a powerful influence in Chinese art and culture. Back in the Han dynasty emperors were buried in suits made of thousands of tiny rectangles of jade sewn together with gold wire in the belief that jade would preserve the body. Examples of these magnificent suits can be found in Nanjing and Hefei, Anhui (Liu Sheng's tomb). Fine jade ornaments found in Liaoning from 3500BCE and Jiangsu from 2500BCE, show the very long history of working in jade. Ancient jade was made into circular disks (bi ➚ 璧) with a central perforation which symbolized heaven; whereas the jade ‘cong’ 琮 (a square outline encasing a cylindrical hole) symbolized earth.

Traditionally, a rod of jade was given when someone reached the age of 70. It was called a jade scepter 玉杖 yù zhàng or dove staff 鸽杖 gē zhàng and measured one foot long with usually a dove carved at one end as the dove symbolizes longevity. Ceremonial insignia of office in ancient China include the jade scepter (ruyi) and spear (戈 gē). In many ways, jade in China holds the same rank as gold and diamonds in the West, it is also highly prized in other countries in Asia; Central America and Australasia.

True jade comes in a variety of colors and is either the mineral jadeite or nephrite. Fashions in jade come and go, with different colors gaining popularity, currently white or cream jade is the most highly prized. Cream or white jade is often called 'mutton fat jade' and symbolizes purity. Jade according to legend came from holy mountains, and nephrite was mined for centuries in the Kunlun mountains near Hotan, on the south side of the Turpan basin in Xinjiang. Boulders of jade can still be found on the banks of the Karakax and Yurungkash rivers there.

The most common color of the Jadeite form is light green that comes mainly from northern Burma. Qing Emperor Qianlong so loved the lustrous green jade from Burma that he launched three unsuccessful campaigns to take over the mines. Most of the things he touched were required to be made of jade. To this day the supply of jade comes mainly over the mountains from the mines near Hpakant ➚ - a very profitable operation controlled by the Burmese military.

The character for jade 玉 yù shows three pieces of jade strung together that are said to represent virtue, beauty and rarity. The addition of the dian (dot) stroke completes the character and distinguishes it from 王 wǎng the character for monarch, while still illustrating the kingly connection. The modern form of the character for kingdom is 国 guó which has the jade character enclosed in a boundary to represent 'country' and so jade is a component of the name for the country of China - Zhongguo 中国. Jade as a character radical is used in a range of other characters such as 现 xiàn ‘appear’; 瑰 guī ‘precious’; 玷 diàn ‘blemish’ and 理 lǐ ‘principle’. The English name ‘jade’ comes from the Spanish ‘piedra de ijada’ ➚ from the belief that powdered jade was a medicine that combats kidney ailments. Jade in Chinese sounds the same as 愈 yù a character for ‘heal’ and this may be another reason that jade suits were made for the deceased and why jade is kept as a lucky charm to keep illness away.

Jadeite is a sodium aluminum silicate (NaAlSi2O6) in the pyroxene group of minerals. It is quite rare and occurs only in low grade metamorphic rocks ➚ (sedimentary rocks that have experienced a short period of increased pressure and temperature). Jadeite tends to be light to emerald green in color. The main modern source of jadeite are mines in neighboring Burma. In October 2016 a huge block was found ➚ and valued at $180million. Nephrite is the other mineral considered as ‘true jade’ (zhen yu) and was used before Jadeite became available in the 18th century. Nephrite is a different mineral - a tremolitic or actinolitic amphibole ➚ but also metamorphic in origin. It has a more varied composition which gives a wider range of colors - when nephrite contains a lot of iron it can even be brown or orange. Nephrite is softer than jadeite and was mined extensively in the Kunlun mountains ➚ that form the border between Xinjiang and Tibet. Due to the variation of color with many bands and veins it is a matter of luck as to how useful an excavated block of jade will turn out to be. Unfortunately some 'jade' on sale is counterfeit and may be soapstone or other cheaper materials. True jade can usually be distinguished by its hardness (it can not be marked by a steel knife) and its coldness to the touch.

人心隔肚皮
Rén xīn gé dù pí
A person's heart is not discernible from looking just at the body
People are inscrutable. Do not judge by appearance
Do not judge a book by its cover
All about Chinese proverbs

One of the most famous jade sculptures is the Jadeite Cabbage ➚ on display at the National Palace Museum in Taipei. A piece of jade was chosen that naturally grades from cream to dark green to match a real cabbage. It was expertly carved in the Qing dynasty. Hidden within the leaves are a locust and katydid and they symbolize female virtue. The exhibit is very popular with long queues forming to catch a brief glimpse of it each day.

The Jade Emperor is the supreme god (玉皇帝 yù huáng dì) of the Daoist tradition. Emperor Zhenzong of the Song dynasty used a supposed mystical connection with the Jade Emperor to bolster his rule. Jade exemplifies all that is good and so is associated with the noble man (junzi ➚) of Confucian ideals. By legend it is considered as crystallized moonlight (a very yin substance). Many colloquial expressions have jade associated with parts of the body, often complimentary but with a sexual connection. The Queen Mother of the West (西王母 xī wǎng mǔ) is often shown by a jade pool. She was reputed to live in the Kunlun mountains - the source of jade.

A lavishly illustrated book covering all aspects of China not just 'symbols': traditions, scenic sights, festivals, arts, legends and famous figures. The text descriptions are a little short but it does give a very good general overall coverage and the photographs and illustrations are very good.
Amazon details... ➚

Confucius extolled the virtues of jade in this lengthy tribute.

“Jade is precious not because it is rare, but because the quality of jade corresponds to virtue. It relates to such virtues as benevolence, wisdom, righteousness, propriety, loyalty, and trustworthiness, and it also corresponds to the ways of the heaven and earth. Jade is mild and gentle, just like a benevolence. Jade has a fine texture yet it is solid, just like a wise person; with a careful, meticulous and thorough way of handling things. Though jade has edges and corners, it is not sharp and will not hurt others, resembling a sense of justice and uprightness. When the jade is hung, it symbolizes polite restraint and prudence. When it is struck, it releases a clear and spirited sound like music. Though jade is beautiful, blemishes do not obscure its merits. Just like loyalty, it is without bias and without the need to conceal. In addition, the color of jade can be seen from all angles. Just like trustworthiness, a person's behavior is consistent with words. Even in a darkened room, a person is trustworthy and does not cheat others. Jade is crystal like, glittering and translucent as a white rainbow, like the white clouds of heaven, which harmonize the heavens and correspond to heavenly principles. The spirit of the jade can be seen in the landscape, like ‘when jade lies in a deep pool, it makes the river enchanting. When jade rests on the mountain, the grass becomes luxuriant.’ Wherever located, it is bound to have an effect, just like a noble demeanor can harmonize many things and benefit the whole region. People everywhere cherish jade, which is because people respect and admire virtue. The noble virtues are the manifestation of heavenly principles.”

Modern Chinese Dushan jade sculpture from central China.
It shows the variability of color within a block of jade. Here the artist has used the variation to exquisite effect.
Image by Artfiber ➚ available under a Creative Commons license ➚

Jade was used as a tough stone originally for axes and knives in the Stone Age, as a superior alternative to flint. Thereafter its use became ceremonial and ornamental as although hard it is rather brittle making it unsuitable for fashioning weapons.

There are many sayings that mention jade. Just as in English where ‘rough diamond’ is used to describe an uncouth rascal, in Chinese there is a similar expression about roughly hewn jade. Here are some proverbs concerning jade:

To celebrate the start of a new twelve year cycle - the year of the Rat - we've produced a fiendishly difficult New Year Quiz and also a recipe for a very popular New Year treat - jiaozi. The Spring Festival falls on Saturday 25th January and for many people the holiday will last a whole week. Xīn nián kuài lè - Happy New Year!


Read full story…
Read all our news stories...
宁为玉碎,不为瓦全
Nìng wéi yù suì, bù wéi wǎ quán
Don't be a proud piece of broken jade, be a complete tile
Stand up against enemies do not give in. Keep your integrity and stand firm
Fall on your sword
瑕不掩瑜
Xiá bù yǎn yú
A speck on a jade stone can't obscure its brilliance
One small fault won't spoil the impression of an overall exceptional person
逢奸宁可玉碎,气正不求瓦全
Féng jiān nìng kě yù suì, qì zhèng bù qiú wǎ quán
In face of evil, rather be a broken jade than an intact brick
It is better to die with honor than surrender
抛砖引玉
Pāo zhuān yǐn yù
Cast out a brick to invite jade
Stimulate others to contribute to conversation by making a silly or superficial remark that sparks off debate.
Video not visible
YouTube video showing how jade is carved

Jade remains a prized gemstone and sculpted into wonderful jewelry and ornaments. Qingtian, Zhejiang; Shoushan, Fujian and Luoyang, Hunan are noted centers for working in jade.

Together with tea and silk, porcelain from China is its most famous export. Prized the world over, high quality porcelain commands high prices at auction. Like silk the secret of its manufacture was a closely guarded secret for centuries.

Attitudes to women have changed greatly in China over the centuries. The traditional subservient position of women in society was removed in only the last sixty years. Our section on women describes their role down the centuries including concubines and how some Imperial women bucked the trend.