Live performance has always been a vital part of Chinese culture. We cover the most well-known form of performance art : Chinese opera in a separate section. Here we look at the traditional Chinese forms of puppetry, dance, drama and story-telling. 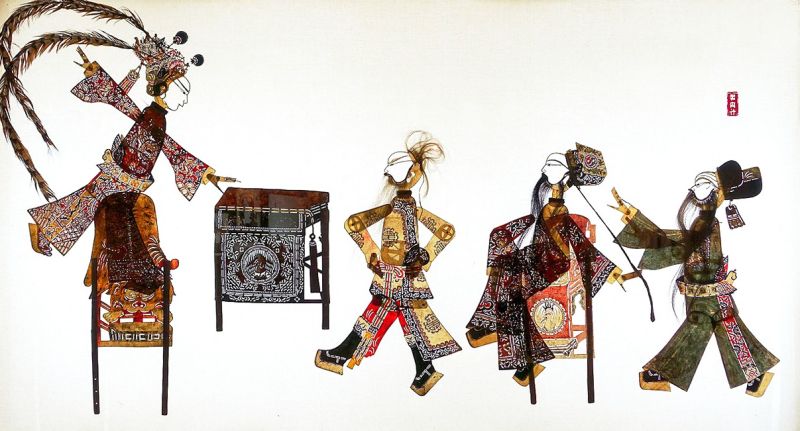 Exhibit in the Sichuan University Museum (四川大学博物馆) - Chengdu, Sichuan, China. Photography was permitted in the museum without restriction. Image by Daderot ➚ available under a Creative Commons License ➚

As the international border runs directly through the mountain China claims the eastern half of the world's highest mountain. The English name is named after the surveyor who measured its height - Sir George Everest. In China it is known as Zhumulangma 'Holy Mother'.
Read more…

There has long been a high standard of street theater and puppetry in China. Details of the early history are limited, the art form emerged between 8th century BCE to 7th century CE. A famous legend about its origin puts it in the Han dynasty when Emperor Wu mourned the death of a favorite concubine and puppet brought her memory back to life.

Various forms of puppetry developed but by the Song dynasty shadow puppets became the most popular form. This makes it the earliest animated technique in the world and has UNESCO world cultural heritage status ➚. The typical form of shadow puppets uses a back-lit sheet against which puppets are placed by the performers from behind the sheet. The puppets are traditionally made from translucent leather that is dyed (although paper is also used). Some puppets had up to eleven moving pieces to be manipulated by thin metal rods. Six performers manipulated the puppets backed by a few musicians playing traditional instruments. Performers sang and narrated the stories from a repertoire of about 50 tales.

There was a wide range of subjects portrayed in the art-form from knockabout ‘punch and judy’ style entertainment through to lengthy historical epics. 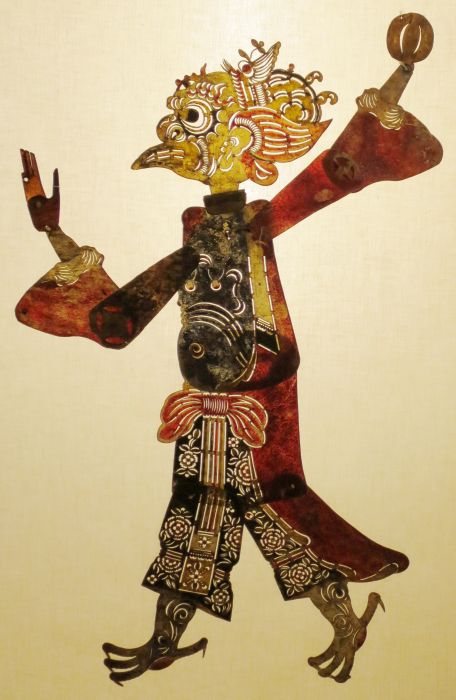 As well as shadow puppets there is a long tradition of the more familiar puppet shows using hands (glove puppets) or stringed marionettes. See this highly skilled performance as an example: 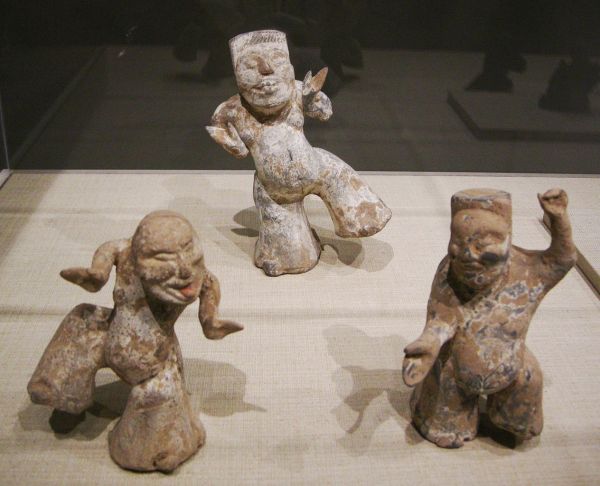 Yāng ge 秧歌 is a traditional dance associated with celebrations at harvest time. It is joyous and vivacious. Sometimes seen in northern cities all year round. It is a tradition across northern China from Shaanxi through to Jilin.

More familiar to visitors to China are the Lion and Dragon dances. They can be easily distinguished because the lion has two operators while the dragon has many more. 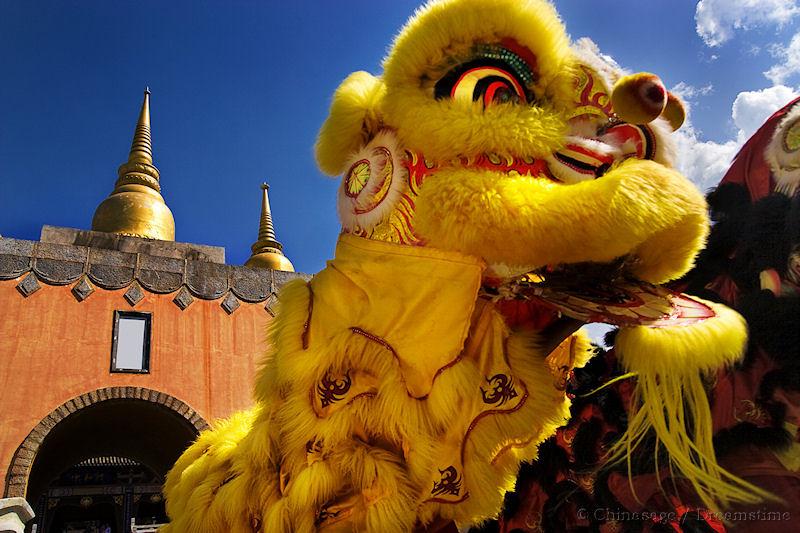 Traditional lion dance near a temple

The lion dance has two operators and has distinct regional variations. The northern form (北狮 běi shī) is the older and the costume resembles Pekingese dogs rather than lions. There may be two adult lions played by two performers with two cubs played by single dancers.

The southern form (南狮 nán shī) originated from Guangdong, the lion has a single horn on a papier-mache head making it larger than the northern form. The southern form is the one most likely to be seen outside China. The Lion dance is traditionally seen at Chinese New Year but can be seen at other festivals and celebrations. The performers are often students of martial arts. The lion wanders down streets and stops to take part in 采青 cǎi qīng where the lion takes a green vegetable tied with a red envelope. The lion attempts to 'spit' out the vegetable and keep the lucky red envelope. 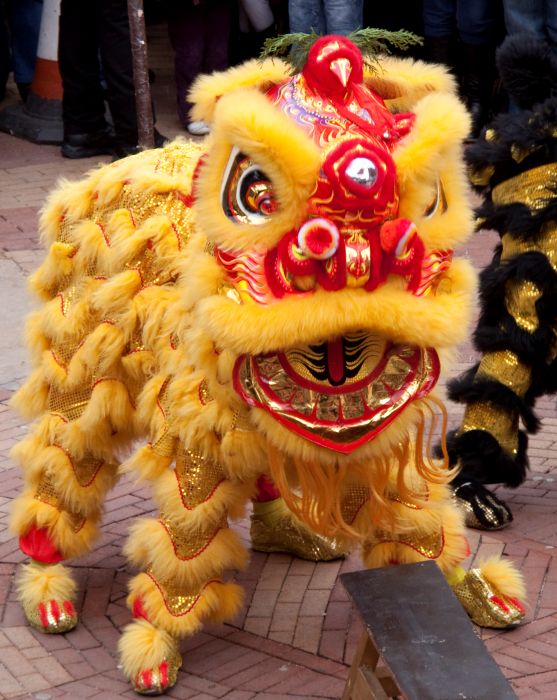 Most people are familiar with the twelve years and their animals. Chinese astrology places emphasis on the year of birth rather than the month of birth and so all people born in a particular year share some characteristics. Even to this day couples choose to delay the birth of a child so it will fall in a 'lucky' year. Read more…

The dragon has a head operated by one dancer followed by a number of dancers along the body underneath a flowing red fabric held up by poles. Some dragons can be 100 yards [91 meters] long. It probably dates back to the Han dynasty (2,000) years ago. There is considerable skill to ensure head and body move together in a convincing way. Common moves are 'chasing a pearl (of wisdom)' or ball and 'threading money'. It used to be restricted for New Year celebrations but is now seen at other times but not as widely as the lion dance. 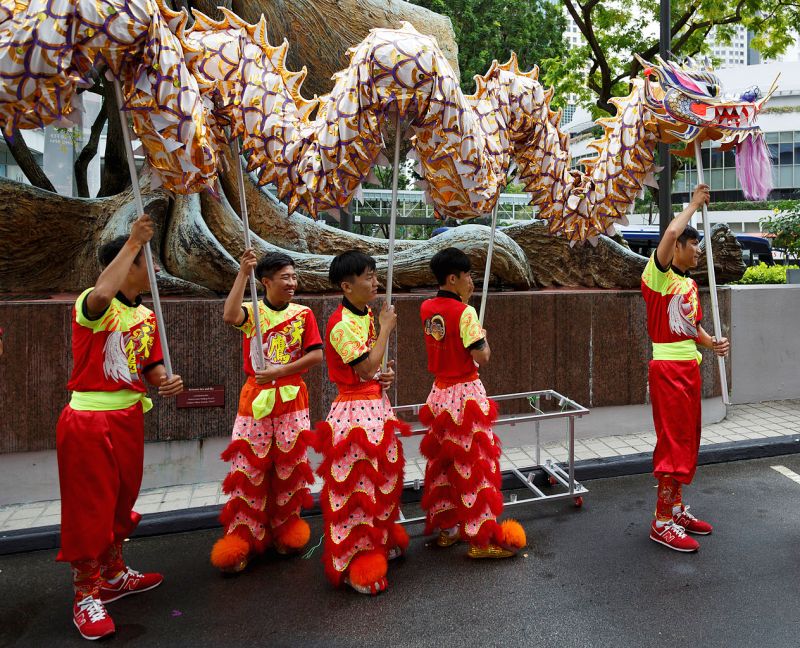 The history of drama in China has a continuous history of over 900 years. Carvings from Han dynasty tombs show actors in performance putting the history back 2,000 years.

The first well documented drama comes from the early Song dynasty at the Imperial palace at Kaifeng. The Chinese Opera tradition (see separate full section on opera) was born out of the union of ballads and comedic sketches. The themes followed a broad range of topics from history, religion, military, Imperial palace and romance. The solitary story-teller was also an important related entertainment.

From the Mongol dynasty came the 杂剧 zá jù comedic theater. In the Ming the change of musical tastes brought in the 传奇 chuán qí form. Gao Ming ➚ was a pioneer of this form with his famous Song of the Lute (琵琶记 Pí pa jì). With the move to the south in the Southern Song the Kunqu form of opera took prominence.

While the sophisticated Chinese opera forms entertained the Imperial and educated classes a more basic form entertained ordinary people. The stage may be at a temple or set up temporarily in a village for a visiting theatrical troupe - often blocking the main road. Some can be as simple as a ‘Punch and Judy’ style show. They would be typically hired at the expense of the village chief and may also give a private performance to his family. The traveling life of the actors led to association with prostitution and as in Europe all male performers became the norm.

The dramas are set to music from a limited repertoire of traditional tunes. Although the dramas cover a wide range of stories they did not have tragedies - it was considered an uplifting entertainment and not a place for horror or sadness. 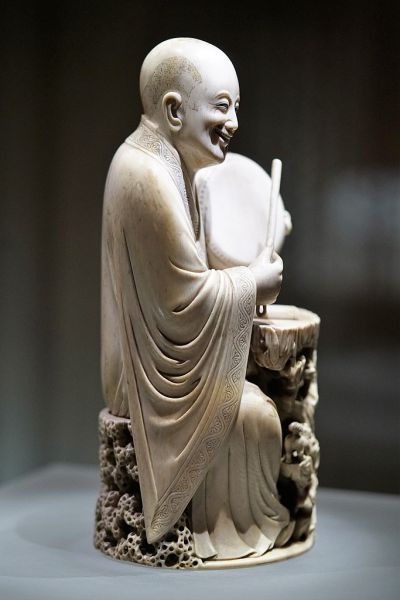 Telling stories is an age-old tradition the world over. It was the only art form accessible to ordinary people. An itinerant story-teller would come and entertain the locals in their village with familiar tales from long ago. In China the situation was no different and as in many other areas the Chinese tradition has survived the centuries.

Many scripts used by story-tellers from the Song dynasty (one thousand years ago) still exist. To become a story-teller you entered a guild which taught the basic technique in the local regional style from a young age. It was principally an oral tradition - a story-teller memorized the whole story and there were many blind practitioners of this art-form.

In more modern times the typical setting was the tea house. While people came and chatted or played Chinese chess over a cup of tea, the story teller stood and recounted his tale. Listening with attentive silence was not the tradition, and this added challenge to the story-teller - he needed to grab their attention. Quite often the stories focused on historical events long ago, the Three Kingdoms period provided a rich source of such tales.

From the Ming dynasty a tradition of famous story-tellers grew in Yangzhou, Jiangsu - at the junction of the Grand Canal and Yangzi River. There were hundreds, so permanent platforms were built along the main road for them. Two of the most famous were Jin Guoshan and Gong Wuting. It was said of them: “When you listened to Jin Guoshan, you didn’t need to eat; when you listened to Gong Wuting you forgot to stop eating”.

As literacy has increased dramatically in the last century the tradition of story-telling has almost disappeared, there used to be many regional variations much as in the case of opera and theater. Like many traditional art forms it was violently suppressed during the Cultural Revolution and barely survived.

Shan Tianfang ➚ 单传忠 (1934-2018) was one of the few who kept the tradition alive and has trained many young performer to carry it on. Shan came from Liaoning and over sixty years of performance adopted the style of standing behind a table and using only a gavel and fan to animate key points. Other top performers were Yuan Kuocheng and Liu Lanfang.

While Pingshu often tackles historical subjects Xiang Sheng is geared to raise a laugh. The performers are trained from a young age to perform parody, satire and comedy. They may imitate people or birds or wild animals. It can be a solo or double act. The performers engage in all sorts of verbal gymnastics to entertain their audiences. It is usually performed in a tea-house or small theater.

Traditional Chinese Opera was the entertainment of all Chinese over many centuries. A long evening performance contains elements of drama, music, comedy, acrobatics and martial arts. Each region has its own distinctive form. Over time complex body movements represent specific meanings as a very sparse set is used. The art form has inspired many Western composers and playwrights to emulate the style.