The country of China

On the less factual side we describe China's wildlife and a separate section on the Giant Panda and also its food source: Bamboo. There's also a page on the top visitor attractions in China.

Each individual province has its own page (including a detailed map) and there are pages describing the geography and historical features of China: the Yellow River; Yangzi River; Great Wall and the Silk Road.

Finally we cover the contentious topic of relations with Taiwan; Japan; Korea; Singapore and the South China Sea.

Click on the map of China for a full description of individual provinces. 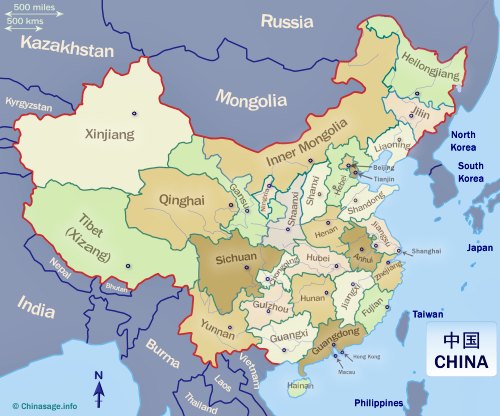 China, home to 1 in 5 of all humanity, is the most populous country in the world and the third largest in land area after Russia and Canada; slightly ahead of the U.S.A. and Europe. It is divided into 33 administrative regions (22 provinces; 4 metropolitan municipalities; 5 autonomous regions and 2 special autonomous regions). The map of provinces shows the geographical division of China into provinces. We also have a map of each distinct geographic region of China. Geographically the Yellow and Yangzi rivers act as boundaries, thoroughfares and water sources for the majority of Chinese people.

China is a very varied country with high mountains in the south-west; arid deserts in the north and north-west; tropical rainforests in the far south-west and snowfields in the north-east. It is dominated by two large rivers: the Yellow River in the north and the Yangzi in the center, both flowing east into the East China Sea. It is subject to climactic extremes, from tropical uniformity in the far south to harsh, long and cold winters in the far north. Most rain falls on the eastern and south-eastern areas during hot and humid summers. Please refer to our Climate and Geography guides for further details.

China has been the most populous nation for much of the last few thousand years. The draconian 'One Child Policy' measure was introduced to curb the worrying recent growth. Read more…

Population is densest on the South China Plain formed by a triangle from Beijing (Hebei) to Luoyang (Henan) to Shanghai. Apart from that main triangular area, Sichuan; Chongqing and the southern coast are also heavily populated. As early as 1830 the population stood at 395 million; it passed the 1 billion mark in 1982 and now the total population stands at 1,434 million. China has always been densely populated compared to other countries, reaching about a third of the total world population at times. The density varies widely from the 'average' of 130 people per km2, from over 3,000 in Shanghai to 2 over the vast empty lands of Tibet. The one child policy instituted in 1979 has halted the rapid increase and China's population is stabilizing, it is likely to be overtaken by India as the most populous nation in a few decades. The proportion of men to women is 119 to 100 and there are concerns about the surplus of boys who will remain unmarried. For much more on this topic please refer to our China population section.

The Han Chinese are the dominant people, but in the border provinces indigenous people predominate. The five autonomous regions of China (Tibet; Xinjiang; Guangxi; Ningxia and Inner Mongolia) give these areas limited relaxation of central control. It is the people that make up a country, and there are a surprising number of minority peoples that have all contributed their own cultural influence. For all about the different nationalities that make up China please read more in our Peoples of China section.

During the Tang dynasty the extent of Chinese ruled territory spread west through Central Asia. The decisive battle at Talas in 751 with the Arab Abbasid Caliphate led to the defeat of Gao Xianzhi and the end of Chinese western expansion.
Read more…

Historically the Great Wall defines the north wall country of China as much as anything, it is even mentioned in the Chinese National Anthem. The world's longest canal, Grand Canal runs north-south and knits together the important rivers as they flow east to the sea. When contact with Central Asia and Europe took the over-land route it was the Silk Road into China that carried the goods through the natural gateway into Gansu.

China has an extremely diverse geology. The land now forming China is made up of a number of tectonic plates that have fused over the billions of years of Earth's history. The varied geology gives a wide variety of soil types for agriculture and extensive deposits of minerals; oil and gas.

For all about China's many geographic regions please see our geography section. 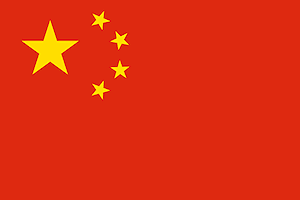 The flag ➚ of the People's Republic of China is the red of revolution and good fortune with one large and four smaller stars angled around it. The large star symbolizes the Communist Party and the other four stars the important classes of people of China: working class; peasantry; petit bourgeoisie (small family businesses) ➚ and patriotic capitalists. Reflecting the views at the time it excludes intellectuals and ‘ordinary’ capitalists. Lucky red is the color of communism and the Han dynasty, while yellow is for the Yellow River as well as the skin color of Han Chinese people. A later revision suggested that the smaller stars may refer to the ethnic minority peoples of China. It has been known, even at Olympic Games ➚, for the smaller stars to be incorrectly aligned causing offense to Chinese people as each smaller star should be alightly rotated with respect to the larger star.

The National emblem ➚ of the People's Republic of China has the same five yellow stars for the party and the important classes of people of China. They stand above a representation of Tiananmen Gate, the entrance to the Forbidden City from Tiananmen Square. The circle is surrounded by ears of grain representing the rural peasants while the gear at the bottom stands for the industrial workers. The Chinese National Badge was designed in 1935 by Liang Sicheng, Lin Huiyin and others and finalized by Gao Zhuang.

Previously the flag used by the Republic of China (1928-1949) had a white sun in a blue sky surrounded by red ground. The twelve rays of the sun symbolizes either months or hours. The red ground represents the blood of martyrs who died to found the Republic. Blue is for liberty and white for equality and democracy. It is still used by Chinese Taipei (Taiwan).

Another flag briefly used for the Republic (1912-1928) was five equal horizontal bars of different colors.

Each bar represents a different ethnic group: red for Han Chinese; yellow for Manchu; blue for Mongolians; white for Hui and black for Tibetans. This misses out the largest minority group in China the Zhuang. The Japanese puppet state of Manchuguo used a variation of this flag.

Further back in Chinese history, each dynasty had its own flag; the last Manchu Qing dynasty developed a rectangular format (1889-1912) rather than the original triangular form to tie in with flags of other nations. It is also known as the Yellow Dragon Flag, a blue dragon is chasing a red pearl. Yellow has been the color of emperors from ancient times.

Tian Han wrote the national anthem and it was set to music by Nie Er ➚ in 1935. It is entitled “The March of the Volunteers” 义勇军进行曲 Yì yǒng jūn jìn háng qǔ and was written at the time of the Republic of China and the fight against Japanese invasion. It first appeared as the theme song to the film ‘Heroes in an era of turbulence’ in 1935. The lyrics are by 田汉 ➚ Tián Hàn (1898-1968) and the music by 聂耳 ➚ Niè Ěr (1912-35). It was adopted as the national anthem in 1940.

Arise, you who refuse to be slaves;
With our own flesh and blood,
Let us build a new Great Wall!
The peoples of China are at their greatest peril,
Everybody must roar his defiance.
Arise! Arise! Arise!
Millions of hearts beating as one,
Brave the enemy's gunfire, march on!
Brave the enemy's gunfire, march on!
March on! March on! On!
Video not visible
YouTube video of a performance of the Chinese National Anthem

Why do we call the country of China 'China'? It is not the name used by the Chinese people themselves. In fact there are a number of names used in the 'Middle Kingdom' that reflect the country's rich cultural and historic heritage.
Please wait...
Downloading information about character