Welcome to the Chinasage web site.
We'd love to keep the pages free of advertisements but we do need some income to continue to develop it. So, rather like Wikipedia, we need your help to keep this entirely independent information source prospering.
If we can collect a total of just $200 a month from all our visitors we could operate permanently without displaying any more adverts. We are collecting new subscriptions with the Patreon platform - you have full independent control of your subscription. Please consider a subscription, however small or large, it all helps! Please click on the Patreon link to learn more about Chinasage and how you can subscribe.
Many thanks! 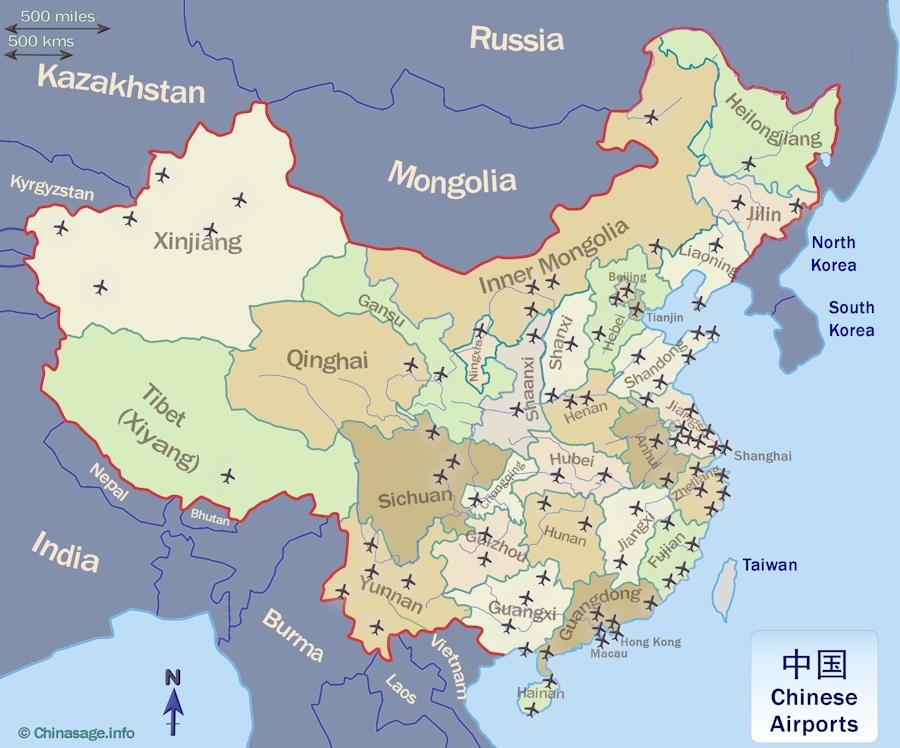 Click on an airport in the map of China to select information in the table and the map. Here is a list of the all the major Chinese airports across all provinces. You can click the top of each column to sort the table of information. The distance column shows the direct distance in miles from the currently selected airport to all other airports in China.

Click on a row to select a Chinese airport and highlight in the map. The Map link will display a detailed Google map of the location of the Chinese airport. The Info link takes you to a web page with details of flights from the airport (where available), some of these web sites are in Chinese. The IATA ➚ and ICAO ➚ are the unique international code for the airports. Rank is the ranking according to amount of passenger traffic in 2016.

Getting by in China

There are many customs and traditions that you should know before traveling to China. Our customs page covers such things as giving gifts, banquets, sealing business deals and how to behave in public. A respect for age old traditions will impress your hosts who will appreciate your efforts to embrace the culture. Learning about 'face', 'guanxi' and general etiquette will make everyone feel more relaxed. Read more…

Traveling by air in China

The network of Chinese airports has grown rapidly in the last fifteen years. The four main hubs for travel into China are at Hong Kong; Shanghai; Beijing and Guangzhou; from these major airports there are connecting internal flights to all provinces in China. Airports are expanding and multiplying at a remarkable rate with many new routes being opened each year. Hong Kong used to be the main entry point for foreign tourists to China. Air China ➚ is the main international airline in China providing a basic service and an excellent safety record. Highest demand and therefore prices are in the holiday period June to September; at Chinese New Year and the public holidays at the beginning of October.

The check-in time requires arrival two hours ahead of flight and the standard baggage allowance is 44 pounds [20 kgs]. There is no longer a departure tax. On arrival a form needs to be submitted giving immigration; customs and health information together with a passport. Checks can be strict, in particular any signs of a viral infection (colds, 'flu) can cause substantial delay - as a precaution against spread of bird flu and other viruses. Most Chinese airports have all the modern facilities that you would expect to find in an advanced country.

愚公移山
Yú gōng yí shān
The foolish old man who moved mountains
Anything can be achieved with persistence. The old story ➚ is that an old man wanted to move a mountain that blocked his path. Despite widespread cynicism he and his descendents gradually wore down the mountain. Mao Zedong used this proverb to persuade people that the seemingly impossible was achievable. One version of the story has the gods taking pity on the old man and removing the mountain with mighty powers
Go the extra mile
All about Chinese proverbs

In this page we give information on the top attractions all over China to maybe tempt you to explore further. Each attraction is clearly marked on a map and further information on each place is readily available. From furthest Heilongjiang to Hong Kong and Lhasa to Shanghai we have selected the top travel highlights. Read more…

As discounted tickets can often be found, internal flights within China are best bought in China after you have arrived. There are 30 major domestic airlines in China ensuring a competitive market for air travel. They are administered by the CAAC ➚ (Civil Aviation Administration of China). Weather in the mountainous south and west often disrupts air travel and so some internal flights are subject to frequent delays and cancellations.

The continued investment in the railway network has made trains a fast, comfortable and inexpensive alternative. In the 1960s and 1970s many Europeans reached China on the Trans-Siberian railway into northern China.

You need to apply for a visa at a Chinese embassy before travel as a visa is required to travel. A standard 30 day travel visa is usually adequate. Although travel to Hong Kong or Macau may not need a visa, onward travel into China does. A specific permit is needed to visit some places in China, most importantly for Tibet and Xinjiang where independent travel is not allowed - you have to go as a member of a group.

The countries that surround China have an interesting set of relationships. Wars, conquest and religion have defined the current boundaries of the Peoples' Republic. India, Russia, Pakistan, Myanmar and Vietnam have important borders with China.