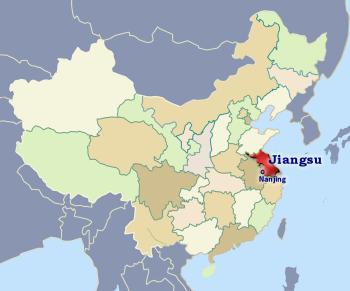 Jiangsu is a coastal province straddling the Yangzi river as it reaches the sea. Due to its position on the route of the Grand Canal industrial development started hundreds of years ago making Jiangsu a key Chinese province.

做 zuò to make; to produce

Jiangsu's history goes back at least 5,000 years. It was part of the Wu kingdom in the Warring States period, and then became integrated into China during the Qin and Han dynasties before re-emerging as the Kingdom of Wu again briefly during the Three Kingdoms period. The Wu language dialect is still a widely spoken dialect of Chinese in southern areas. During this time many Han people fled war in the north to settle in Jiangsu and they soon outnumbered the indigenous Yi people. Jiankang (on the site of present day Nanjing) was the capital of the southern China dynasties before China was re-united under the Sui dynasty. Under Qing rule the original province called ‘Nanzhili’ was renamed ‘Jiangnan’ and finally split into modern Jiangsu and Anhui in 1666.

Understanding the Date and Time in Chinese

The city has always been an important crossing point of the Yangzi (the first bridge 5,108 feet [1,557 meters] long was built as late as 1968). It is strategically situated on a narrow portion of the Yangzi before it flows into its estuary. Nanjing became the country's capital back in early Ming dynasty times hence its name which means Southern capital. Later on Nanjing (then known abroad as Nanking WG) was the capital of Hong Xiuquan's Taiping Rebellion and there is a museum in the city telling the story of the rebellion. Sun Yatsen chose Nanjing as his Republican Capital of China in 1912; it remained the key city in China up until the Japanese occupation of the city in 1937 which resulted in the infamous Nanjing Massacre ➚. Although 5,000 years of history can be traced in the city, it has been so scarred by invasion (the Manchu conquest; Taiping Rebellion) and natural disasters that not much of the ancient city remains. Some traces of its prosperity during Ming times are still visible particularly the vast city wall 21 miles [34 kms] long; 52 feet [16 meters] high (the longest ever built in the world at that time).

Emperor Zhu Yuanzhang the founder of the Ming dynasty has his mausoleum at Xiaoling complete with the traditional Sacred Way lined with stone animals and officials. At the foundation of his dynasty the city was China's capital and a Forbidden City was constructed to be rebuilt later with dynastic tombs on a grander scale at Beijing. It contained the Porcelain Tower ➚that was considered the finest pagoda tower in China. It was destroyed during the Taiping Rebellion and a replica was built in 2010 at great expense. The Provincial museum is fittingly impressive. There is a solemn memorial to the Nanjing Massacre of 1937 when the Japanese invaded and many were slaughtered and raped. The pioneering mile long bridge across the Yangzi river was completed in 1968 and has a viewing tower. Lake Xuanwu north of the city has a busy and attractive park and Yuhaitai Hill has the tomb of a King of Borneo who died on a visit in 1408.

The Purple Mountains or Zijin Shan ➚ lie just east of the city, the mountains have been called the ‘Circling dragon’ above the city which represents the ‘Crouching tiger’ giving the siting of the city very auspicious Feng Shui. Nearby are the mausolea of Emperor Hongwu and Sun Yatsen (Zhongshanling ➚). The Purple mountains offer pleasant relief from the summer heat of the city, as together with Chongqing and Wuhan, Nanjing makes up the 'three furnaces' of China. The Linggu Temple and Pagoda on the mountain are popular landmarks. On the top of the hills is the prestigious astronomical observatory ➚ where many comets and asteroids have been cataloged since it was built in 1934. It has a museum of many ancient astronomical instruments.

Suzhou - city of canals and silk

China's distinctive traditional architecture is one of her core cultural treasures. From pagodas, temples to hutong courtyards the Chinese building tradition has changed little until modern times. Fine examples of exquisite workmanship can be found all over China. Today impressive buildings are being constructed using the best available technology. Read more…

Suzhou contributes the 'su' part of Jiangsu's name. Dating back 2,500 years, it is a city with many canals and gardens. Laid out in a neat grid it has six gateways. Its famous 150 gardens were once owned by wealthy private families. One of the oldest and most famous is Canglangting ➚ (Pavilion of the Surging Waves) built in the Song dynasty by scholar Su Zimei. Zhouzhengyuan ➚ (Garden of the humble administrator) is the largest garden built during the Ming dynasty. The classical gardens were put on the World Heritage list in 1997 as masterpieces of Chinese landscape design. The natural style of Chinese gardens had a great impact on garden design in Europe. The gardens often contain lakes, sculptures, potted plants and bizarre rock formations. Suzhou has been dubbed the 'Venice of the Orient' with its many canals and waterways. There is also the Song dynasty Beisa Temple; Ou Yuan (Double garden); Shuang Ta (Twin Pagodas); Tiger Hill and Xuanmiao Guan (Daoist temple). Suzhou also has an impressive museum of Opera and Theater ➚. Nearby is Pan Men ➚ landmark with a modern scenic area with many examples of Suzhou's heritage. Both Wuxi and Suzhou are cities whose long prosperity goes back to the production of silk, the original luxury textile.

谈虎色变
Tán hǔ sè biàn
Turning pale at the mere mention of a tiger
To be so timid that even mentioning danger causes fear.
Roughly equivalent to: Afraid of your own shadow
All about Chinese proverbs

When tin mining had exhausted all the deposits in the area, the city of Wuxi was given its present name, which means without tin. Jasmine tea is produced in this area. In both Suzhou and Wuxi, the canals, gardens, and bridges over them feature significantly. Kunqu Opera, China's oldest traditional opera is performed here.

Taihu Lake ➚ near to Wuxi, Jiangsu is a beautiful tourist spot. It covers 593,053 acres [2,400 sq kms] but only 7 feet [2 meters] deep, it is nearly round and supplies water to surrounding farmland. The lake has an island Dongting Xishan which is worth a visit. There are a number of famous, ornamental gardens on the banks (Plum Garden; Tortoise head Garden; Li Garden). Close by is Erquan Pool ➚ located within Xihui Park ➚, the water is considered some of the very best in China and the pool has been immortalized by the traditional erhu (Chinese violin) melody “The Moon mirrored in the Pool”. Recently pollution had started to become a problem but with tough control measures the purity of the water has improved.

On the north bank of Taihu Lake near Yixing are limestone caves at Shanjuan and Zhanggong. The caves have impressive stalagmites and stalactites. Zhanggong cave is named after the Daoist immortal Zhang Guolao. The city of Yixing has a pottery that makes much admired red teapots ➚. It also has a fine Confucian temple.

Zhenjiang is a city with historic buildings serving as the eastern gateway to Nanjing just up river. Close by is Jinshan, originally an island in the Yangzi, has at its top 197 feet [60 meters] the Cishou Pagoda - Temple of Benevolence and Longevity. On the route to the summit is 1,500 year old Jinshan Temple once home to thousands of monks. Jiaoshan nearby has a story of Jiao Guang ➚ who lived there as a hermit but it is most famous for its collection of calligraphy including that of Qing Emperor Qianlong. Beigu cliff ➚ is well known due its mention in the classic book Romance of the Three Kingdoms.

The railway bridge running from Danyang to Kunshan ➚ is currently the longest in the world. It is called the 丹昆特大桥 Dān kūn tè dà qiáo and is 105 miles [169 kms] long. It was built to elevate the railway above the low-lying ground along the route of the Grand Canal between Nanjing and Shanghai, it was opened in 2011.

Tongli is a pretty water town - a smaller version of what Suzhou used to be like with canals and gardens. Zhouzhuang, on the Jinghang Canal, is another small town with old buildings.

Yangzhou at the junction of the Grand canal and Yangzi has declined in importance over the years. It was visited and described by Marco Polo. Its chief trade was the production of salt during the Qing dynasty, this industry has been replaced with the transportation of coal from Shandong. The city has the Da Ming Temple and the Hanlinyuan Museum housing the tomb of Liu Xu (c. 100BE) as well as historic gardens. It is also famous for its professional story-tellers. The tomb of Sui dynasty emperor Yangdi is located at Xuzhou which boasts the Han Terracotta Army ➚, a smaller but impressive echo of the Qin Terracotta Army at Xi'an. Just outside the town of Huaihai there was a major battle that decided the outcome of the Civil War between the Nationalists and Communists.

Changzhou is on the southern continuation of the Grand Canal towards Suzhou and is a prosperous old city with a large textile industry while Nantong is a large port and industrial city at the mouth of the Yangzi.

Closeness to the sea ensures Jiangsu has hot, humid summers and generally cooler, drier winters. It is China's lowest lying area (as the delta of the Yangzi) crisscrossed with drainage channels and lakes and as such is the area most likely to suffer with the expected rise in sea level. The copious water and alluvial soil forms rich agricultural land providing rice; wheat; fish and many other crops including silk. The province's waters and farmland have led to its nickname as the ‘Land of fish and rice’. Heavy and light industries are both well represented giving it over 10% of China's total GDP. The southern portion of the province has developed very rapidly in modern times, outpacing Guangdong province and is much richer than the northern part.

The top university at Nanjing is one of the oldest in China. It is split into two campuses one near the city center and the other to the northeast. It covers all disciplines with high attainment in the sciences as well the arts.. Undergraduates: 13865, Postgraduates: 12793, International students: 1847, GP World ranking 130

Although many think that Chinese people are all the same there are many different ethnic groups that make up China (55 are recognized). The mountains of south-western China in particular are rich in diversity offering a range of customs and traditions.
Please wait...
Downloading information about character