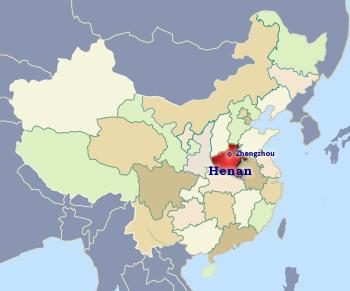 Straddling the Yellow River that was the birthplace of Chinese civilization, Henan is an ancient province, within it are two of the ancient capitals of China: Luoyang and Kaifeng. Mountains to the west and center separate the Yellow River from the southeastern area (the Nanyang plain) which is drained by the Huai River. Floods from both the Yellow and Huai Rivers have punctuated Henan's long history. Henan had cities right back in the Shang dynasty (1600 - 1046 BCE) with its capital at Jenshih (Anyang) just west of Zhengzhou. The meandering Yellow River in ancient times followed a course further north near to Anyang. Remains from even earlier, one of the earliest world civilizations - the ancient Yangshao Culture ➚ can be seen at a museum near Mianchi.

The flowering of cherry blossom is a welcome sign of a return to normal in Wuhan. After a year which began with a very tight lockdown of 52 days some medical workers are returning to admire the cherry blossom lining the streets and parks. More than 42,000 nurses and doctors from all over China answered the call to come to Wuhan to join in the fight against Covid-19 Grateful residents are now offering free tours and performances to the workers and their families in the cherry blossom season.

The modern provincial capital of Zhengzhou is on the site of an ancient Shang city called 'Ao' around 13th century BCE. The coming of railways made Zhengzhou an important center and it has greatly expanded since 1949. Henan was one of the areas worst affected by the Great Leap Forward policy of Mao Zedong. Henan is the second most populous province with just over 100 million people. Favorable soil and climate make Henan an area of rich harvests, although nowadays it has become heavily industrialized.

Luoyang just south of the river was the ancient capital of China for 13 dynasties before it was sacked by Jurchen invaders in 937CE. The philosopher Laozi is one of the many great figures associated with the city. It is sometimes known as the ‘eastern Imperial city’ but has few remaining ancient buildings after centuries of plunder. The city museum's has many fine exhibits of Luoyang's days of pre-eminence. There is an annual Peony Festival which was brought into being by famous Tang Empress Wu Zetian. Baimasi (White Horse Temple) at Luoyang claims to be the oldest Buddhist monastery in China dating back to 68CE. The name refers to the legend that it was founded by two monks who arrived on a white horse. The city has grown far beyond its ancient limits and is a modern industrialized city.

In ancient China the Emperor would do very little without consulting the Yi Jing (I Ching). The Imperial court had experts to interpret the answers given by this method of Divination. Because it produces a set for the 'present' and also a 'change' it is called the Book of Changes and contains explanations of the transformations. Our online free consultation uses the original yarrow stick method and is not random - you make decisions that guide the consultation. We provide a full translation of the great commentary on each of the 64 hexagrams. Read more…

The Longmen Caves ➚ (‘Dragon Gate’), 7 miles [12 kms] south-west of Luoyang in Henan has a fine set of Buddhist carved figures dating back to Wei and Tang dynasties (500-900CE). There are over 1,300 grottoes with nearly 100,000 Buddhist statues of all sizes. Of particular interest are the inscriptions in the ‘Grotto of Prescriptions’ which gives 120 recipes for herbal medicines. Tang Empress Wu Zetian had the famous vast seated Buddha 56 feet [17 meters] erected here. Many of the sculptures are damaged, this started when Buddhism fell out of favor in the late Tang dynasty and as recently as the Cultural Revolution when all old artifacts came under attack. Longmen Caves provides evidence of China's long excellence in porcelain manufacture at the Jun Royal Kiln ➚, Xuchang which dates back to Song dynasty times. The area also contains the tomb of the Tang poet Bai Juyi.

Kaifeng, Henan became the capital city after Luoyang was abandoned and was at its zenith up until the invasion of the Mongols in the Song dynasty when it was looted and destroyed. One of the most famous scrolls in China ‘Going up river at Qingming Festival’ shows a very detailed and accurate portrayal of life at Kaifeng in its heyday. Subject to periodic flooding many historic buildings of that time have been swept away leaving little trace. There is a viewing platform where the nearby surging Yellow River can be seen. The path of the Yellow River has changed greatly over time, only a few centuries ago it flowed south-east reaching the sea to the south of Shandong.

The ‘Shanshan Gan Guildhall’ is a heavily decorated Qing dynasty hall built by merchants. The Prime Minister's Temple (Da Xiangguo Si ➚) has been rebuilt on the site of the main Buddhist temple in the Song capital city. It is most famous for a large statue of the Buddhist Goddess Guanyin. Longting Park has been built in the Song dynastic style for the benefit of tourists. More authentic is the Fan pagoda ➚ located south of the city which dates back a thousand years. It was at Kaifeng that the Yellow River's levees have been deliberately breached, once in 1644 to hold back the invading Manchu (unsuccessfully) and again in 1938 ➚ when Chiang Kaishek flooded the land to impede the Japanese invasion, killing one million Chinese ➚ people in the process. A great flood in 1841, at the time of the first Opium War, led to many deaths as the whole city was submerged in waters for many weeks. The city is also renowned for a small isolated community of Jews who settled at Kaifeng hundreds of years ago. The Iron Pagoda ➚ (made of rust colored bricks rather than iron) is another interesting tourist site reflecting its ancient heritage.

Near Kaifeng is the Baogong Temple ➚ built in memory of Bao Zheng renowned for his fair administration of justice. Guanlin Temple ➚ commemorates Guan Yu of the Three Kingdoms period who was worshiped as a ‘god of Righteous Action’. The Dragon Pavilion ➚ at Kaifeng is another ancient temple.

The huge city of Shanghai has become the leading city in Eastern Asia once again - just as it was back in the 1920s. Known for its dynamism and cosmopolitanism, Shanghai rivals Beijing as the nation's most important metropolis. Strategically placed near the mouth of the Yangzi river it is ideally placed to act as a gateway into Central China. Read more…

The sacred mountain of Songshan ➚ is a famous scenic site south east of Luoyang. At 4,902 feet [1,494 meters] it is an impressive peak with scary, precipitous paths leading to the summit. The Temple of Songshan is the oldest stone pagoda in China as it dates back to Northern Wei times (523CE). The Daoist ‘Temple of the Central Mountain’ is older but has been rebuilt over the centuries since its foundation in Han times. On the foothills of Mount Song is the Gaocheng Observatory ➚, a World Heritage site, dating back to the Yuan dynasty which recorded accurate astronomical observations for centuries. A gnomon ➚ was erected in the Tang dynasty here to help measure the circumference of the Earth (the ancient unit of distance was derived from this). It allows for very accurate measurement of shadows and from this the date and length of the year. The measurements were not surpassed in Europe for hundreds of years. The main observatory was restored in the Ming dynasty. Songyang Academy has two ancient cypresses called the Lesser and Greater Generals believed to date back two thousand years and given by Han Emperor Wudi in 110BCE.

Close to Mount Song is the world famous Shaolin monastery ➚ (literally ‘Small Forest Temple’) immortalized by the 'Kung Fu ➚' series of the 1970s. It is a Zen Buddhist temple and dates back to the Wei dynasty when Indian Da Mo ➚ founded the monastery and instigated the Wushu martial art. Nearby is the Pagoda Forest (Talin) of 200 tombs dating back as far as the Tang dynasty. The tombs of the early Song dynasty emperors are close by at Songshan, between Zhengzhou and Luoyang. Not much remains now apart from the statues marking the Sacred way to the tombs.

Anyang is the most ancient of the cities, it is built on the remains of the Shang dynasty capital of Yin. There is a museum housing many remains from this period including the oracle bones inscribed with early Chinese characters. Nearby is the tomb of Yuan Shikai, the 'Republican' marshal who tried to found a new dynasty in 1915.

Near Anyang is a more recent achievement of human labor, the Red Flag Canal ➚. It was built between 1960-1974 with the same large scale use of labor as the Great Wall, it provides irrigation and transportation in the arid northern part of Henan.

The modern, provincial capital of Henan is Zhengzhou which has only a few old buildings but does have an extensive provincial museum. Yellow River Park to the northwest gives good views of the Yellow river. Zhengzhou has an annual Martial Arts Festival every September.

Henan has two dams that have tried to tame the destructive power of the Yellow River. The Sanmenxia dam was built in the 1950s with Russian help and has not been very successful. More recently the Xiaolangdi dam was constructed that has proven more effective.

The end of the dynastic system in China came after a very promising and prosperous start under the wise rule of the first four Manchu Emperors. Years of decline followed, with the Opium Wars and Taiping Rebellion culminating in the sad tale of the Last Emperor Puyi.

The shrewd and ambitious Wu Zetian [624-705] came to rule China soon after the Tang dynasty had begun. For over 40 years she directed China's policies firstly as the Emperor Gaozong's wife and then in her own right. She championed the adoption of Buddhism in China and equal rights for women.
Please wait...
Downloading information about character