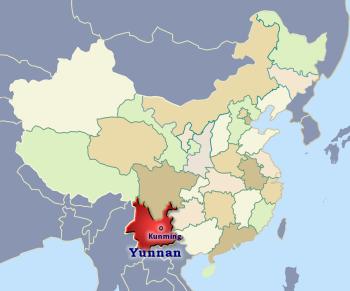 China although predominately populated with the Han Chinese, has over 100 million people identified as belonging to other ethnic minorities. However these people are concentrated in the less densely populated 'fringes' of China so may form the majority in certain areas. Tensions with other peoples has been a cause of troubles throughout China's long history and continue to this day in Tibet and Xinjiang. Read more…

Yunnan means literally Clouds south, and it is an appropriate name because warm tropical air from the south is funneled up the narrow steep valleys giving them rich and exotic vegetation in the mist laden air. Yunnan remains a popular tourist destination that is somewhat off the beaten track.

Yunnan's position on the mountain borders of Vietnam; Laos and Burma (Myanmar) have made it the refuge of many different tribes of people including Hui; Tibetan; Miao; Yi; Zhuang; Yao; Bai; Hani; Jinuo; Nu and Dai (among others) all with their own languages and traditions. They hold their own festivals too : March Fair ➚ of the Bai people; Water-splashing Festival ➚ of the Dai people and the Torch Festival ➚ of the Yi people.

Kunming's lofty height and low latitude at 6,214 feet [1,894 meters] makes it pleasantly warm all year round (82 ° F [28 ° C]). The provincial capital of Yunnan is on an ancient trail to India. Wu Hua Shan (Five Flower Hill) near the center has traditional temples and houses. In the late 19th century the area came under strong French influence and a railway was built from French run Hanoi. Lake Dian ➚ is overlooked by Daguan (Grand View) Hall on the western outskirts of the city; and is one of the largest freshwater lakes in China. To the west Xi Shan (Western Hills) offers a steep climb of 1,333 steps cut into a cliff. There are several temples and pavilions on the way to the top with impressive views over Lake Dian. Lake Dian has many fishing villages along its banks and there are hot springs on the eastern shore. Qiongzhu (Bamboo) Temple ➚ is the most famous in Yunnan dating back to the 13th century. Kunming also boasts Jindian (Golden Hall) built in 1671, although it is actually built entirely in bronze rather than gold. Nearby are camellias 600 years old. Yuantong Temple is a Buddhist pilgrimage site.

Other places to visit in Yunnan

The Stone Forest at Shilin ➚ to the south-east is a popular tourist destination full of gray limestone pillars the size of tree trunks. The Peak Viewing Pavilion provides a panoramic view of the extensive area. Sani ethnic people act as guides and celebrate festivals mainly for the benefit of tourists. Xiaguan ➚ (Dali) is an important town on the former Burma Road ➚ link into China and the main road to Tibet. It is famous for its Three Pagodas (Dali Santa). Er Hai (Ear lake) is picturesque with fishermen using tame cormorants to catch fish.

Lijiang ➚ is a popular tourist spot, made famous by a British documentary series called Beyond the Clouds ➚; it is at a high altitude 8,530 feet [2,600 meters] and home to Nakhi (Naxi) minority people ➚. The Naxi are rare as a matriarchal society - the women own all the land. The impressive gorge of the Jinsha (Golden Sands river, better known as Yangzi) River is one of many sights to be seen in Yunnan. The Golden Sands River was where the Communist Army crossed the Yangzi during the Long March. Further downstream, the town of Dukou (Panzhihua) marks the navigable limit of the Yangzi (Chang Jiang) river. Zhongdian ➚ in northern Yunnan has renamed itself ‘Shangrila’ to reflect an association with James Hilton ➚'s famous novel about a paradise hidden in the mountains. However, the more likely setting for the fabled city of Shangri-la ➚ is the sacred mountain Kawagarbo ➚ 22,113 feet [6,740 meters] on the Tibetan border near Deqin ➚ and sacred to Tibetan Buddhists. Nearby the Jinsha Jiang (headwaters of the Yangzi) narrows at the famous Tiger Leaping Gorge ➚.

Terracing of the river valleys for rice cultivation is a feature of Yunnan. The warm climate and southerly position provides good growing conditions but the mountainous topography has required extensive terracing to create flat contour-hugging fields to be created. The area between the Red and Lancang rivers in western Yunnan is particularly famous for its terraced fields. It is an area peopled by the Hani ethnic group.

China has not only the highest mountain in the world on its borders: Mount Everest (Qomolangma) but also the second highest K2 on the border with Pakistan.
Read more…

In the far south of Yunnan is Xishuang Banna ➚ near Jinghong, a gem of a nature reserve containing China's only tropical rain forest. For thousands of years there have been a variety of mountain people living in the luxuriant forest. The steep mountain sides have protected the area from cultivation (except for a few rubber plantations). Many exotic and rare plants grow here together with a range of different species of monkey and also elephants. Some of China's only active volcanoes are in the far west - the Tengchong Volcanoes ➚. Close by in Menghai is an ancient Buddhist temple and pagoda ➚. Gejiu ➚ in southern Yunnan is well known for its tin; copper and lead mines. It was the extensive tin deposits that brought the interest of European powers to the area (particularly France) in the nineteenth century.

Evidence from archeological finds from Yuanmou ➚ take the story of hominid habitation back 1.7 million years. After conquest by China in the Han dynasty, Yunnan became independent again as part of the Nanzhao Kingdom ➚ and then the Kingdom of Dali ➚, it did not become fully integrated into China until the Yuan dynasty (13th century). In the 19th century it became a target for the expansionist ambitions of the French Indo-Chinese Empire but the plan never quite came to fruition. A long rebellion by Muslim leader Du Wenxiu ➚ 1858-73 led to much bloodshed. Yunnan was the first province to rebel against Yuan Shikai's proclamation as Emperor in 1916. During the Second World War the Burma Road cut through the Yunnan mountains to Kunming and then on to Chongqing, bringing vital supplies to the besieged city, then the capital of Nationalist Free China. There were resistance to Communist rule in the early years of the PRC, at times fueled by the growing of opium in the valleys which the Communists had banned.

Yunnan has pockets of rich farmland among the forests on the steeper slopes where tobacco is an important crop. Warm summers; frost free winters and moderate rainfall makes it ideal for crop growing but only on the very limited areas of flat land along the many river valleys. The deep valleys that cut north-south through the province make travel very difficult, the roads having to frequently double back. Industry is concentrated around the capital Kunming. The province has great scenic beauty making it an increasingly popular tourist attraction throughout the year.

The Song dynasty is considered a highpoint in Chinese cultural sophistication. Great strides were taken in the creative arts and literature. Prosperity from the growing trade by sea rather than overland fueled the building of large southern cities. The eventual conquest by the Mongol hordes brought the dynasty to a tragic close.

The iconic vision of the Great Wall snaking its way up mountainsides is known the world over. One of China's great accomplishments that is genuinely awe-inspiring is the Great Wall. The true story behind the wall is more interesting than the widespread myths. Although it stands for China's enterprise and indomitable spirit, it in the end proved a monumental waste of human endeavor. On our page describing the wall we debunk some of the many myths surrounding its construction.
Please wait...
Downloading information about character