In this section we look at all the strands of religious belief in China. This page gives an overview of religion in general, we have separate pages that cover Confucianism, Daoism, Buddhism - the three main religious beliefs. There are also pages on the more recently imported religions of Islam and Christianity. Perhaps most important of all is Ancestor veneration - the oldest tradition. There is also an encyclopedia of all the vast pantheon of gods and goddesses that are so important to understanding festivals and sculptures at temples. The historically important philosophies of Mohism and Legalism are described later on in this page.

We also look at the more general traditions that are related to the official religions: Qi, Yin-Yang, Symbolism, Astrology (the 12 year cycle), Stars in the sky, Feng Shui, Yi Jing and Dragons. 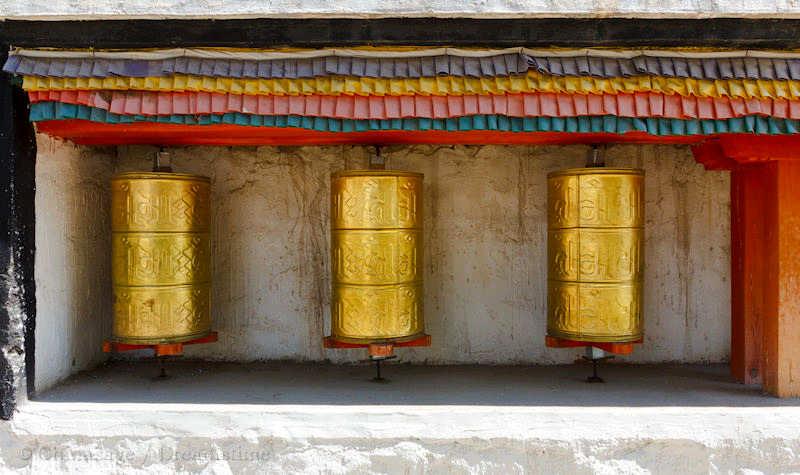 Religion in China needs some explaining to a Westerner because in China it is not quite the same concept; in China ’religion’ might be better translated as ‘guiding philosophy’.

The institution of Emperor, as head of the Chinese family of people, lasted for thousands of years and to some extent lives on with the Presidency. In China there has been great respect for the Emperor/President who in turn is expected to rule wisely with the best interests of his subjects in mind. To early European visitors to China the structure was considered close to the ideal form of society. Read more…

Many Chinese follow the traditions of more than one religion without feeling a sense of disloyalty, as different times call for different perspectives. There is a phrase “Three ways to one goal” that aptly describes how someone can follow Buddhism; Daoism and Confucianism at the same time without apparent conflict. Another saying is that “for a hundred people there are a hundred different beliefs”. There is no sense of disloyalty in attending services of different religions all in one day. The lack of a concept of a ‘One True God’ makes the work of Christian missionaries very difficult. From about the 12th century Daoism and Buddhism became so entangled that it is difficult to distinguish them outside of monasteries. The famous book ‘Journey to the West’ tells the story of how Buddhism came to China but it has many Daoist and mythological elements. The non-absolutist attitude has led to limited religious strife, new ideas have been gradually and peacefully absorbed. Together with the main inter-woven strands of religion are the popular myths and local deities which have no theosophical grounding.

There is a light-hearted story that explains the key differences between the three main religions. A representative of each of the three religions have tasted some rather bitter pickles. The Confucian would say ‘We must more carefully follow the recipe to make better pickles’; the Daoist would say ‘It is fine. They are both sour and bitter, that is the nature of pickles’; while the Buddhist would say ‘It is bitter. Only by resisting the desire for pickles can bitterness be avoided’.

An introduction to Chinese religion can not omit the reverence to the Emperor. The attitude to the Emperor had religious undertones, he was regarded as the ‘Son of Heaven’ and the main conduit to heaven and so the representative of all people and to be universally respected and obeyed. The virtue or otherwise of the Emperor's personal conduct reflected on all his people.

The plum is one of the earliest trees to flower and this often coincides with Chinese New Year. It is considered one of the three friends of winter for this reason. As a symbol it represents long life as the tree is long lived and takes many years to come to flower. Read more…

During the fervent period of Communism 1965-78 all religions came under attack. Temples and shrines were demolished and the priests banished and persecuted. It has been only in relatively recent times that religion has been tolerated by the authorities. Although there was a freedom to preach religion the party gave out the message that Communism and modern science could explain all things; people adhering to old faiths were pitied and despised. Communism became the one true faith with its own sacred texts and rules, for many at that time the Party replaced the Temple. Since 1980 religion has been tolerated, but only under the strict control and guidance of the Communist Party.

The following sections describe each of the main religions in China. In broad summary Confucianism is more of a set of guiding principles than a religion although Confucius himself is revered; while Daoism is a mixed bag of beliefs and philosophies centered around harmonious living with nature. Buddhism is widely observed and although it came from northern India it has been adapted to Chinese needs. Christianity, now that it has lost its historical colonialist association, is growing in strength particularly in the cities. Islam is strongest in the north-west reflecting its historical roots in Central Asia and Muslims now represent about 2% of the population. Lastly there are the ancient 'folk religions' of China which are a very mixed and often localized set of myths and beliefs, often just a good excuse to hold a local festival. The most important belief system is the veneration of ancestors. We also cover many of the deities of folk religion.

Mohism and Legalism were important strands of philosophic thought in the early days of Chinese history.

Mozi is considered the founder of another strand of ancient Chinese thought ‘Mohism’, and comes from the same ancient times as Lao Zi and Kong Zi. He grew up in humble circumstances and may have worked as a carpenter. Mohists followed ten core beliefs and defended them with logical argument and debate.

Where Confucianism stands for proper ritual and relationship, Mozi took a more egalitarian view (大同 dà tóng ‘great comradeship’) and considered ritual as humbug. He attacked injustice and all acts that harmed the people, especially war. Mohists believed in appointment on merit not by birth or favor, people were by nature good at heart.

“When all the people of the world love one another, then the strong will not over-power the weak, the many will not oppress the few, the wealthy will not despise the poor, the honored will not disdain the humble, the cunning will not deceive the simple.”

The love of freedom, universal benevolence, frugality, peacefulness and equality were in direct opposition to the Legalist philosophy of the Qin and was violently suppressed. Not many works ➚ survive, and those that have were somewhat modified by copyists through the centuries. It never became a leading philosophy in China, however in his day he had more active supporters than Confucius ever personally attained. It has many of the qualities of Christianity but without the promise of Heaven or threat of Hell; however they did believe in ghosts and spirits. With a rosy-eyed view of achieving a Utopia of universal love, Mozi never found favor among the ruling elites. It was the Communists who took up some of his teachings 2,000 years after his death. 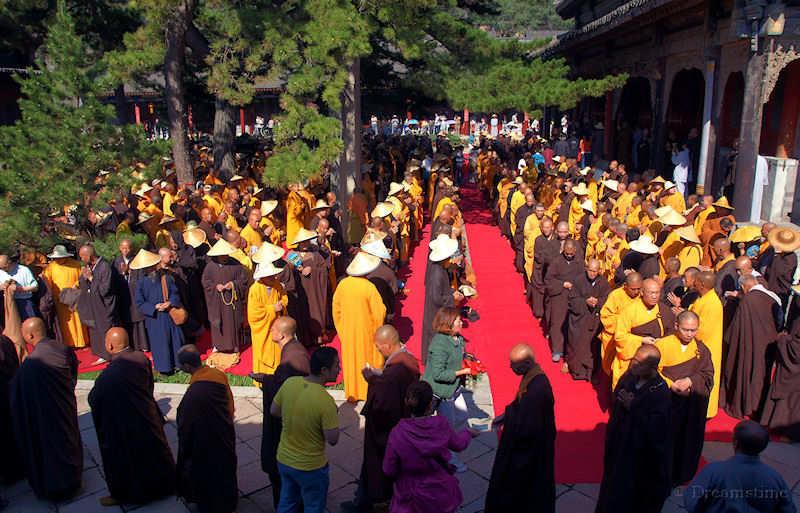 The great Mongol hordes took northern China in 1215 but the south held out until 1279. Kublai khan established the capital of the Great Khan at Dadu, present day Beijing. Their brief period of rule (90 years) saw the Mongols take to Chinese ways, using existing administration and traditions rather than imposing their own. It was China's most cosmopolitan era with the famous visit of Marco Polo. Read more…

The Legalist doctrine in China was important in the early phase of Chinese history. Its name reflects its key attribute: the importance of law, it was a strategy for rule with no religious connotation. At the heart of Legalism was the belief that without strict laws people would be ungovernable, as they are by nature wicked and wayward. Clearly written laws would define proper conduct and so avoid conflict. The ruling elite that decide the laws are set apart from the people and the ruler is above the law, ruling by ‘divine right’. However, in its favor, the laws were applied uniformly and fairly to all the people so that they knew where they stood. The laws laid out rewards for good conduct as well as punishment for bad. It is not hard to guess that it was China's more autocratic rulers that found this philosophy to their liking.

It was the state of Qin in the Warring States period that adopted legalism enthusiastically and contributed to its eventual conquest of China. Legalism allowed a ruler to ignore tradition and enact whatever he thought fit for the benefit of himself and the people. When the Kingdom of Qin became hell bent on military conquest they required farmers to supply more food to support his large army and laws forced an increase in agricultural yields. The fields were closely monitored and if crops failed or animals died, people were punished. Responsibility for crime was considered that of the whole family not just an individual, and so each family had to police their own conduct to avoid brutal punishment. Under Legalism, people had to avoid the ‘six lice’ that represent unproductive effort: care for the elderly; idleness; beauty; love; ambition and benevolence. On the positive side, Legalist rule brought in standardization of all kinds, as everything was dictated by strict laws. A leading proponent Han Feizi ➚ described how the philosophy could be understood: “If a baby has boils that need to be lanced, the mother will hold back from inflicting temporary pain, the wise man is not swayed by emotion, he performs what needs to be done in the best interest of the baby”.

In the death throes of the Qin dynasty all the leading proponents of the Legalist philosophy came to a violent death, some may consider that in itself a comment on the doctrine. The following Han dynasty replaced Legalism with Confucianism, the harsh laws were tempered with the dual responsibility of ruler to the people just as strongly as people to the ruler. Legalism came back briefly to some extent under the second unification under the Sui dynasty. The harsh Communist rule under Mao Zedong had some connection to Legalism and that is one reason why it remain an important philosophy to this day.

The end of the dynastic system in China came after a very promising and prosperous start under the wise rule of the first four Manchu Emperors. Years of decline followed, with the Opium Wars and Taiping Rebellion culminating in the sad tale of the Last Emperor Puyi.