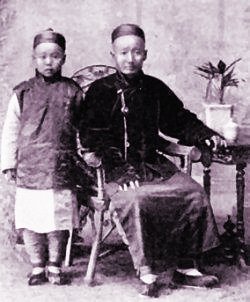 Discovering a Jewish synagogue in Kaifeng came as a great surprise to Europeans in the 19th century. Although the synagogue was built in Chinese traditional style it had a copy of the Torah and was following traditional Jewish teachings. It opened up all sorts of intriguing possibilities. Could the scriptures of an ancient isolated community provide answers to key questions in Christianity as well as Judaism? Was the Jewish community a long last tribe with origins going back to Biblical times? How could have an isolated mono-theistic society have survived in China for so long?

The Chinese regarded the Jews (犹太 Yóu tài) as belonging to a branch of Islam and called them ‘blue Muslims’ because of the color of headdress and shoes. For centuries the Chinese considered all three Abrahamic religions ➚ as sects of a single religion. The Jews were also known as 挑筋教 Tiǎo jīn jiāo ‘extract tendon teaching’ as a description of the way that meat was prepared by removing any tendons to conform with the Torah. A synagogue is called a 犹太教堂 yóu tài jiào táng or 清真寺 qīng zhēn sì (this term is also used for a mosque).

It is now believed that the Jews formed a permanent settlement in the 9th century when Kaifeng was an important trading city at the end of the Silk Road (it was capital of China 960-1126). It was an attractive location for many Central Asian traders and bankers. The founding families may have moved from near Bodrum ➚ on the Turkish shore of the Mediterranean to Xi'an (Chang'an) and then on to Kaifeng. Three of four original steles have been discovered that were located at the synagogue. They date from 1489, 1512 and 1619; they are inscribed with details of the community. The 1489 stele describes the building of the first synagogue in 1163 when 70 families moved to Kaifeng to form a permanent settlement. It also compares Judaism to the three main religions of China and identifies them as Rabbanite Jews ➚ - followers of Maimonides.

The community flourished in the 14th/15th century with about a thousand members; in 1489 70 families are noted in the community. In 1605 the Jesuit missionary Matteo Ricci met 60 year old Ai Tian ➚ in Beijing who had come to take the Imperial exams. Ricci was intrigued when he realized Ai presumed him to be an Israelite rather than a Christian . Ai told Ricci that there were 7 or 8 families in Kaifeng and that there was a fine synagogue with five books of the Old testament over 500 years old. He also reported that there was a larger Jewish community in Hangzhou. Ricci sent a Jesuit convert to check out the story and it all proved true. Ricci had hopes of converting them to Christianity.

However rebels destroyed the community (along with much of Kaifeng) at the start of the Qing dynasty and the last rebuild was in 1653 by Zhao Yingcheng after damage by the 1642 Yellow River flood - Zhao Yingcheng ➚ was an accomplished scholar (jinshi grade) and was appointed a vice commissioner. Many Jews rose to achieve high office in the Chinese government. In the Ming Era the Emperor gave them seven Chinese family names: Ai, Jin, Lao, Li, Shi, Zhang and Zhao. Modern day descendents can still be traced from the family names and this has been confirmed by DNA tests ➚.

This is a photo of an exhibit at the Diaspora Museum, Tel Aviv - en:Beit Hatefutsot. This is a model of Kaifeng Synagogue. Image by Sodabottle ➚ available under a Creative Commons License ➚

The Kaifeng Jews continued to flourish in the 18th century before going into decline in the 19th century . There were Jewish groups elsewhere in China: at Beijing, Hangzhou and Quanzhou but these groups did not last long. In 1810 the aged Rabbi died leaving no-one to replace him because knowledge of Hebrew had not been passed on. By 1853 the synagogue was in ruins and a flood in 1866 destroyed it completely. This was not due to persecution, partly it was because of the general decline of Kaifeng as a major city and also because floods of the Yellow River had repeatedly inundated the city. The community had intermarried with local Chinese and had no longer a distinct identity. By 1904 only 6 families remained.

When Christian missionary activity grew in the mid 19th century, James Finn ➚ (1806-72) came across mentions of Chinese Jews when studying the writings of the Jesuits in London. His book ‘The Jews in China’ published in 1843 created quite a stir, he followed this up with ‘The Orphan Colony of the Jews in China’ in the 1870s. The books produced a great deal of interest in the West - even Charles Dickens commented on the curious discovery. Researchers brought back to Europe some members of the community as well as Hebrew texts. The Torah scrolls were found to contain no unknown content and supported the view that the community had been founded no earlier than the 6th century CE.

In the 1920s David Solomon Sassoon ➚ (1880?1942), a Baghdadi Jew who had traded in Mumbai, India set up a flourishing business in Shanghai; he then made plans to revitalize the Kaifeng Jewish community with new settlers but the Japanese invasion of 1936 put paid to that. In recent years the descendents of the Kaifeng Jewish community have been able to cash in on their ancestry, and have been given special status by the government. Building a new synagogue has been mooted over the years, it would undoubtedly attract many visitors to Kaifeng.

The history of this long-standing Jewish community that lasted a thousand years is surely proof of a good level of religious tolerance within China.