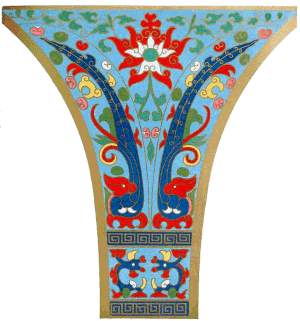 The Chinese make substantial use of color symbolism. Throughout history colors have had specific associations and meanings. Each dynasty had its own dynastic color that was used for its robes and emblems. According to the theory of ‘fives’ of five elemental properties there are five primary colors: red; yellow; blue (including green); white and black. Traditionally colors have been vivid and brash, so that they brightened up the drab houses of the time. In ancient days the character 色 sè was also used as a word for conjugal sex as in Confucius's dictum ‘Eating and sex are given by nature’.

To this should be added later introductions to the spectrum: green; blue (as separate colors) and purple. Purple is an imperial color and also used in the robes of high officials. Brown was the Imperial color of the Song dynasty and represents the earth element, it has no single character in Chinese - it is just 'dark yellow'. A modern name is 咖啡色 kā fēi sè 'coffee colored'. Orange is a surprisingly late addition to English - it was named after the fruit - and in Chinese there is still no word for it - the color would be described as either red or yellow. In Buddhist symbolism red; blue and black are fierce forms while white and yellow denote mildness. Propitious gods are generally white and demons black.

Here is a list of the principal colors that are noted for their symbolism in Chinese art:

Papercut design of birds and fishes.

All about the worrying outbreak of coronavirus in Hubei province, China in early 2020. History of the outbreak , symptoms, status and common myths. Read more...

In the Feng Shui system black is associated with water; from the destruction cycle black (water) extinguishes red (fire); and so what follows a dynasty associated with ‘red’ should be a ‘black’ dynasty. The first Qin Emperor therefore chose black as his emblematic color to extinguish the red of the preceding Zhou dynasty. The roof of the library in the Forbidden City is black to keep fire away.

Black denotes darkness and death but also honor; so in Chinese opera a blackened face is used for grim but honorable characters. The character for black 黑 hēi originates from the process of producing soot which was then made into ink. The character represents a blackened window over a flame.

Generally the color blue has a negative connotation in China. Opera characters with blue make-up are usually ghosts or bad characters. Blue eyes, considered beautiful in the West, are very rare amongst Han Chinese. The wearing of blue flowers or ribbons in the hair is considered unlucky. However a bluebird is the messenger from the gods, principally associated with the Queen Mother of the West.

Pure blue is an expensive dye and for centuries a blueish-green was all that was available, this is called 青 qīng the character is used in the name of Qinghai province after the color of the lake from which it takes its name. As in other cultures separate words for ‘blue’ and ‘green’ were not originally used, qing was used for both colors. The cobalt blue that gave the deep pure colour to porcelain glazes only became available in the Yuan dynasty when it was imported from Persia.

Kuixing the god of examinations is painted with a blue face and, as he committed suicide, he is not a particularly lucky figure. Studying into the night was called to ‘study under the blue lamp’ and blue was the color associated with scholars; blue was used as the color for the sedan chairs of one grade of senior officials.

青出于蓝而胜于蓝
Qīng chū yú lán ér shèng yú lán
Indigo is obtained from the indigo plant, but such color is bluer than the plant itself
Wise schooling has produced excellence beyond the teacher. The follower has surpassed the master.

Looking up in a bamboo forest

Green is the color of vegetation and so is the symbol of Spring and promise of future harvest in China. It is generally a propitious color and the color of the God of Literature's robes.

Green is the color associated with the element ‘wood’, the Ming dynasty and the lucky number 8. The character for green uses the radical for silk denoting the use of green as a dye. It has long been known as the complementary color to red in decorations and paintings. Originally the character 青 qīng used to be used to cover both the colors blue and green. 绿 lù: refers specifically to leaf-green rather than blue-green.

As in Rome, the color purple is associated with the Chinese Emperor because of its rarity and expense (Han purple ➚). The Imperial capital district was formally called the 紫禁城 Zijin Cheng the ‘Purple Forbidden City’ which matches the ‘Purple Forbidden Enclosure’ 紫微垣 in the stars around the North pole. It came into widespread use at a late date and is not considered one of the five principal colors.

In Chinese opera a face is painted purple to represent an incorruptible, loyal mandarin. In color symbolism it represents grief and introspection.

It can be remembered as 'no' with the 'walking'radical to make 'still', the original form had no connection to 'no'.

Red is the color of blood and so by association the color of life itself. In the Feng shui system of five elements red is associated with south and summer. Red is the luckiest color and is widely seen at festivals and marriages to bring good luck and keep evil at bay. Charms written on red paper are plastered all over houses at Chinese New Year because according to legend the Nian monster is frightened by anything red. 宏 hóng sounds the same and means ‘great; magnificent’ so a red color bestows idea of wish for greatness in decorations, so a red bat is a wish for great good fortune.

Cinnabar gives the red color (specifically 丹 dān prodcusing the color 朱 zhū) to official seals and in itself was considered a potent elixir for long life. From cinnabar the pigment vermillion was made and this was the color reserved for the Emperor - he would write his own comments on documents in vermillion ink.

Scarlet or dark red has a separate character 绯 fēi which is similar to English 'scarlet' in meaning to represent a blush of embarrassment.

Red was the dynastic color of the Chinese Zhou dynasty so many things had to be colored red during that period, a red raven was the emblem of the dynasty. A traditional marriage custom is for the newly weds to drink from cups connected with a red thread. The preponderance of red had a resurgence in Mao's Communist Era and it may well be that the ancient auspicious associations of red helped the Communist cause. In opera a painted red face indicates divinity and heroism and is often used for Guandi the god of righteous action.

White, which is really the absence of color rather than a true color, is associated with the direction west, and autumn in the theory of five elements and five colors. White, or more correctly, un-dyed cloth (specifically 素 sù) is worn for funerals and mourning in contrast to black in the West, it is therefore very inappropriate to wear white at weddings. White was the dynastic color of the Chinese Shang dynasty. The white lotus is a strong emblem for purity and virginity. It also represents simplicity as in 白话 bái huà which is the ordinary spoken language as opposed to the literary form. As white hair color comes with old age it can also depict wisdom. In Opera white make-up symbolizes treachery and a white flower in women's hair is considered unlucky.

There are other characters that represent white in different contexts: 皑 ái for snow and皓 hào for old white hair.

When the foreign powers forcibly opened up trade with China in the mid 19th century they did not wish to be subject to Chinese laws which they saw as unfair, savage and corrupt. The principle of Extra-Territoriality was used to make the treaty ports in China subject to foreign legislation over criminal acts, taxation and ownership. The system remained in force until the founding of the Republic of China in 1912.
Read more…

Yellow is a very auspicious color in China, it is probably best translated as ‘golden’ as that gives to a non-Chinese a better idea of its attributes. It is associated with Earth and ‘center’. The loess soils of northern China are Yellow earth 黄土 huáng tǔ and the Yellow River flows through this cradle of Chinese civilization. The Yellow Emperor was the mythical founder of China - indeed 皇 huáng ‘emperor’ sounds the same. Yellow is the color of Imperial robes and the roofs of Imperial buildings. Charms written on yellow paper were bought at temples to keep evil out of the home. The stars on the Chinese flag are all yellow. All this emphasizes the importance of the color yellow is in China. The deep orange-yellow of the Buddhist robe is called 大黄 dà huáng.

We have divided up the large number of art symbols into different categories: Birds, Animals, Colors, Flowers & fruit, General Nature and Assorted / miscellaneous.

The picture of a bird in a Chinese work of art will normally have more meaning than just a pretty picture. A crane or stork represents marital harmony and also a wish for a job as a government official.